Serving the parishes of St Joseph and St Wilfrid. With the shrine of St Margaret Clitherow.

We are very blessed to have the shrine of St Margaret Clitherow within our Parish. The shrine is open every day. Mass is celebrated there every Saturday at 10am. 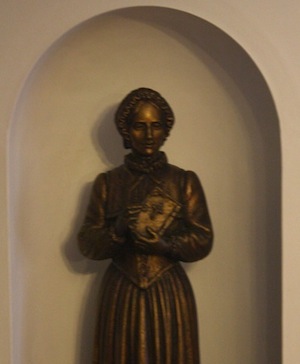 We welcome parishes, schools and groups for pilgrimages. Mass can be arranged in the shrine for smaller groups under thirty people. Larger groups can have Mass in St Wilfrid’s Church and then visit the shrine. It is sometimes possible to arrange walking tours around the sites of York’s long Christian history - depending on how busy we are. A donation towards the upkeep of the Shrine is appreciated for all of these.

Priests wishing to celebrate Mass in the Shrine of St Margaret Clitherow or at St Wilfrid’s either alone or with a group must send their testimonial of good standing to the Safeguarding Office at the Diocese of Middlesbrough. We cannot accept any booking until we have received written confirmation that this has been done. Middlesbrough Diocesan Safeguarding Office, 50a The Avenue, Linthorpe, Middlesbrough TS5 6QT.

St Margaret Clitherow is one of the best known and loved of the English Martyrs. Margaret Middleton was born in York in 1556. In 1571 she married a prosperous butcher, John Clitherow. She became a Catholic in 1574.

At a time when it was held to be an act of treason to be a Catholic priest in England or to shelter a priest, Margaret had Mass celebrated above the family’s house and shop in the Shambles. She also ran a small school to teach the Catholic Faith to children.

In 1586 her activities were betrayed to the authorities. When charged, Margaret refused to plead. She did not want to expose her family, friends or the children in her school to the risks involved in giving evidence in a trial: they may have betrayed others; they might have denied their faith in public.

The penalty for refusing to plead was being crushed to death. It was expected that the victim, in the absence of other evidence, might betray herself under the torture. Margaret suffered this fate on 25th March, 1586. It was Good Friday and the Feast of the Annunciation. She prayed aloud but gave nothing away.

Margaret Clitherow had three children. Her son Henry Clitherow went abroad to train as a priest and returned to work on the English Mission.

The shrine of St Margaret Clitherow is located in The Shambles, YO1 7LZ. View Map.

St Wilfrid’s Church is also home to the Shrine of Our Lady of York.